The Amics del Museu Nacional d’Art de Catalunya is a non-profit cultural foundation with more than 3,000 members, committed to supporting the art and heritage that the museum treasures. We are a very active community that participates in the day-to-day life of the museum, enriching and disseminating the collection that it houses.

Since its creation, many individuals and companies who work with us see the museum as their own. Together they lend their support towards us fulfilling our objectives:

To promote knowledge of the Museu Nacional’s collection. 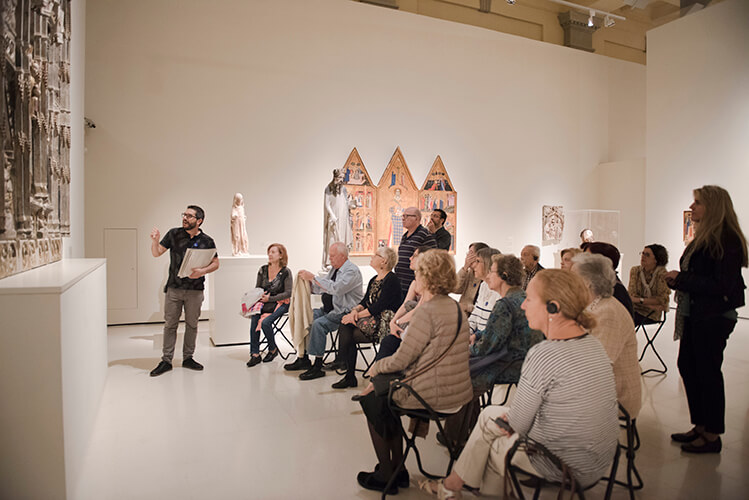 To contributeto preserving and enriching the Museu Nacional’s collections. 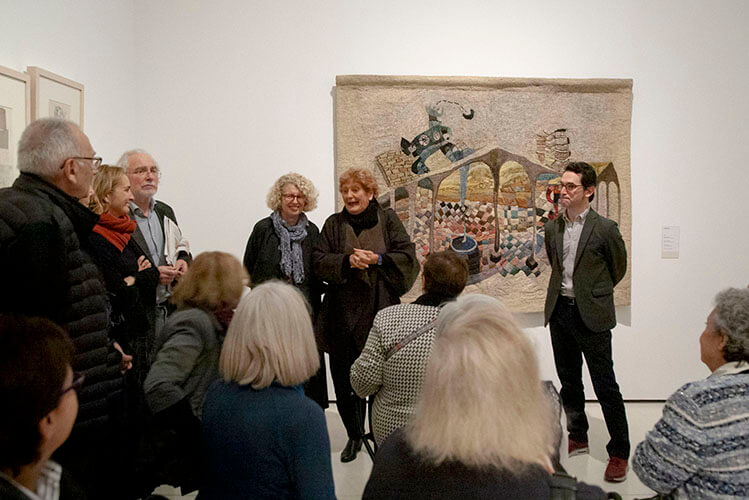 To raiseawareness about the value of our heritage. 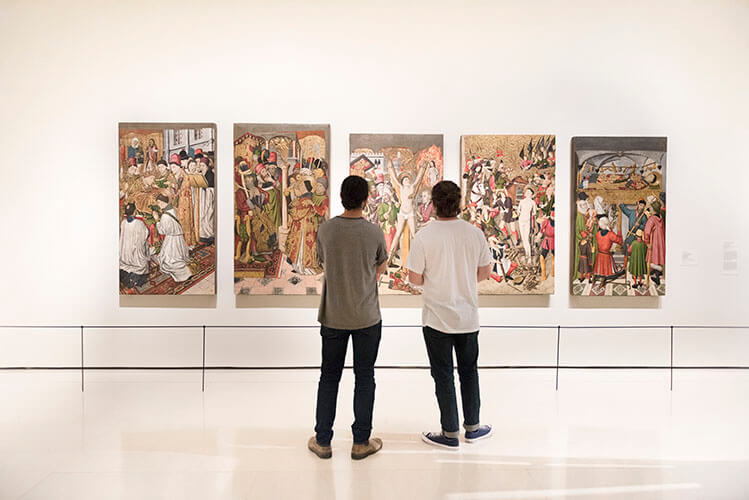 Throughout these first 25 years, among the initiatives carried out by the Foundation, those which have created the biggest impact are the donations, acquisitions and sponsoring campaigns. They have contributed to expanding and enriching our common artistic heritage.

Throughout our history, the Amics have donated eight works to the Museu Nacional d’Art de Catalunya, contributing to the expansion and enrichment of its collection. The donations include one painting byEdvard Munch, two paintings by Josep Togores, one painting by Joan Brull, two paintings byEnric Galwey, one sketch by Joan Llimona and one sketch by Marià Fortuny. This final work, The Prayer, joined the museum in 2013 thanks to a crowdfunding project that saw contributions from more than 240 patrons.

We have also worked closely with the Museu Nacional d’Art de Catalunya to secure the loans of Woman in Hat and Fur Collarby Pablo Picasso (1937), the Romanesque mural Dispute and Arrest of Saint Catherine from La Seu d’Urgell (mid-13th century) and the painting Ramon Casas and Pere Romeu in a Motor Car, by Ramon Casas (1901).

Thanks to the contributions of more than 3,000 members, and to the companies that support the Fundació Amics del MNAC, the Museu Nacional d’Art de Catalunya has been able to acquire two exceptional works. In 2017 it added Old Couple by Carles Casagemas (1900-1901) to its collection, one of his best works from the ‘miserabilist’ line, and Skull, an oil painting by Josep Guinovart (1954) which belongs to the artist’s figurative period and which has the unique addition of a female portrait on the reverse side of the painting.

In 2018, two sets of works of contrasted artistic quality were acquired that will form part of the post-war and second avant-garde Catalan art collection: a set of three works by Mari Chordà (1942) and a set of four original sketches by Enric Sió (1942 -1998).

Finally, in November 2019, the Amics acquired the tapestry Fountain of Life by Aurèlia Muñoz (Barcelona, 1926-2011) for the museum. Muñoz is an internationally recognised Catalan artist and a pioneer of contemporary textile art.

If we can assist you in organising a donation or if you would like to offer a piece to the museum, please contact us at: amics@amicsdelmnac.org or +34 93 622 03 81 and we will gladly study the proposal.

The highest governing body of the Amics del MNAC is its board of trustees, which delegates day-to-day management to the Foundation’s technical team.

The daily life of the Amics del Museu Nacional is governed by values that have shaped the essence of our Foundation. The Amics’ code of conduct is part of the “Code of Ethics for Friends of Museums and Volunteers”, laid out by the World Federation of Friends of Museums (WFFM).

To the Museu Nacional d’Art de Catalunya as a space for knowledge, debate, social ties and participation.

In the governance and organisation of the entity.

Of the activities we organise which invite you to share relevant experiences with us, allowing us to grow.

With other cultural agents in the territory, because by creating synergies we become stronger.

With top-level guides and professionals who guarantee the excellence of our cultural offerings.

In the friendly, warm and personalised attention we give to our members and friends.

The Amics del Museu Nacional work under the maxim that all our actions must be reported in a truthful, clear and verifiable way. This information is considered an asset to the Foundation, and is shared to create value.

The Amics del Museu Nacional publish an annual report detailing the life of our entity. This serves as a tool of accountability towards our members.

The Amics del Museu Nacional d’Art de Catalunya would like to acknowledge the commitment, trust and support of the following companies, without which our work would not be possible:

Keep up to date by signing up to our newsletter!

Enjoy all the information about our weekly activities and other last minute events, access exclusive cultural content and keep up to date with all the benefits you can enjoy through the Amics!

At any time, you can exercise the rights of access, rectification, opposition, portability, limitation in the treatment and deletion of the data subject to treatment by clicking on the links \ "Update data \" and \ "Unsubscribe \", sending a letter indicating the right exercised to the \ 'postal address indicated in the footer or to the following email address amics@amicsdelmnac.org.

At any time, you can exercise the rights of access, rectification, opposition, portability, limitation in the treatment and deletion of the data subject to treatment by clicking on the links \ "Update data \" and \ "Unsubscribe \", sending a letter indicating the right exercised to the \ 'postal address indicated in the footer or to the following email address amics@amicsdelmnac.org.